The project to raise a statue to Barrow's famous son

Although there is a plaque in Westminster Abbey, up until now, there has been no statue to celebrate the achievements of Harrison anywhere in the country or, as far as we know, anywhere else. This is therefore not only a first for Barrow but for the world.

The sculptor, Marcus Cornish, completed his sculpting of the figure in the spring of 2019. The figure was then taken to the foundry near Tunbridge Wells where a cast was made using the centuries old ‘lost wax’ method. This enabled a bronze version of the figure to be made which was then welded together and final adjustments made.

Meanwhile the stone for the plinth was sourced from Cumbria and transported to the foundry so that the name and date could be carved. In Barrow, the foundations had been built and the lighting incorporated into the paving.

It was not until the beginning of March 2020 that both plinth and statue were able to be transported to Barrow, arriving on the morning of the 3rd. The plinth was lowered into position, followed by the figure. Marcus was on hand to see that everything went according to plan. John Harrison had finally come home.

The statue shows Harrison cradling H4, the watch which was the basis for all subsequent marine chronometers, in his hands. He is winding up the timepiece which would allow mariners to tell the time accurately at sea and enable them to work out their position. Harrison is depicted in working clothes balancing on a section of the globe: symbolising not only his struggle to find the mechanical solution but also in dealing with the vested interests and bureaucracy of the Longitude Board. Just behind the standing figure is a ship’s bollard and mooring rope, making the crucial nautical connection between the sea and Harrison’s work. 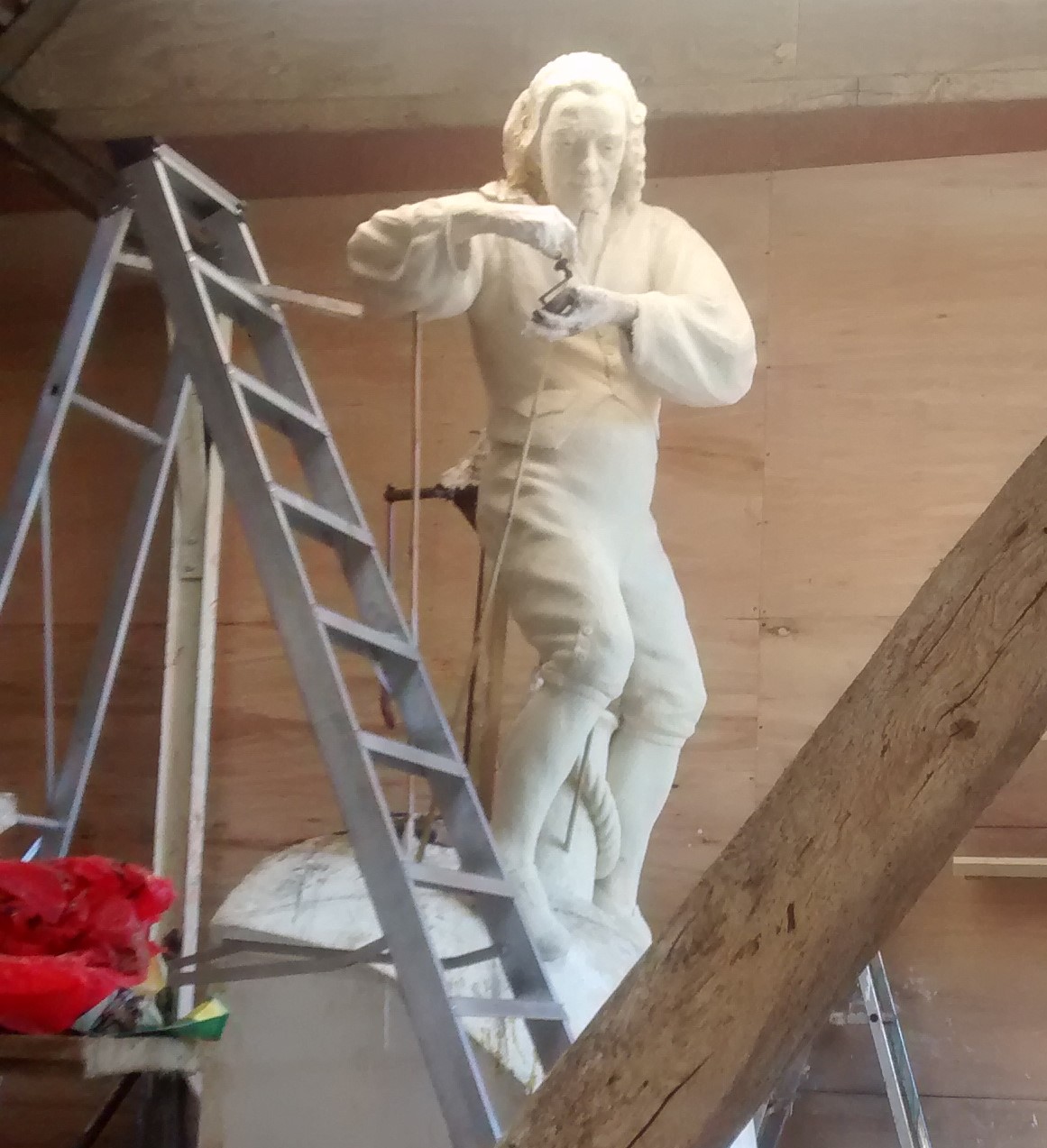 December 2018. Marcus is progressing well with the statue which is really taking shape now.  Sometime in the new year it will be ready to go to the foundary for casting and then we shall begin to have some idea of the date of arrival in Barrow.  The contractors who are constructing the foundations have been selected as has the lighting installation company. 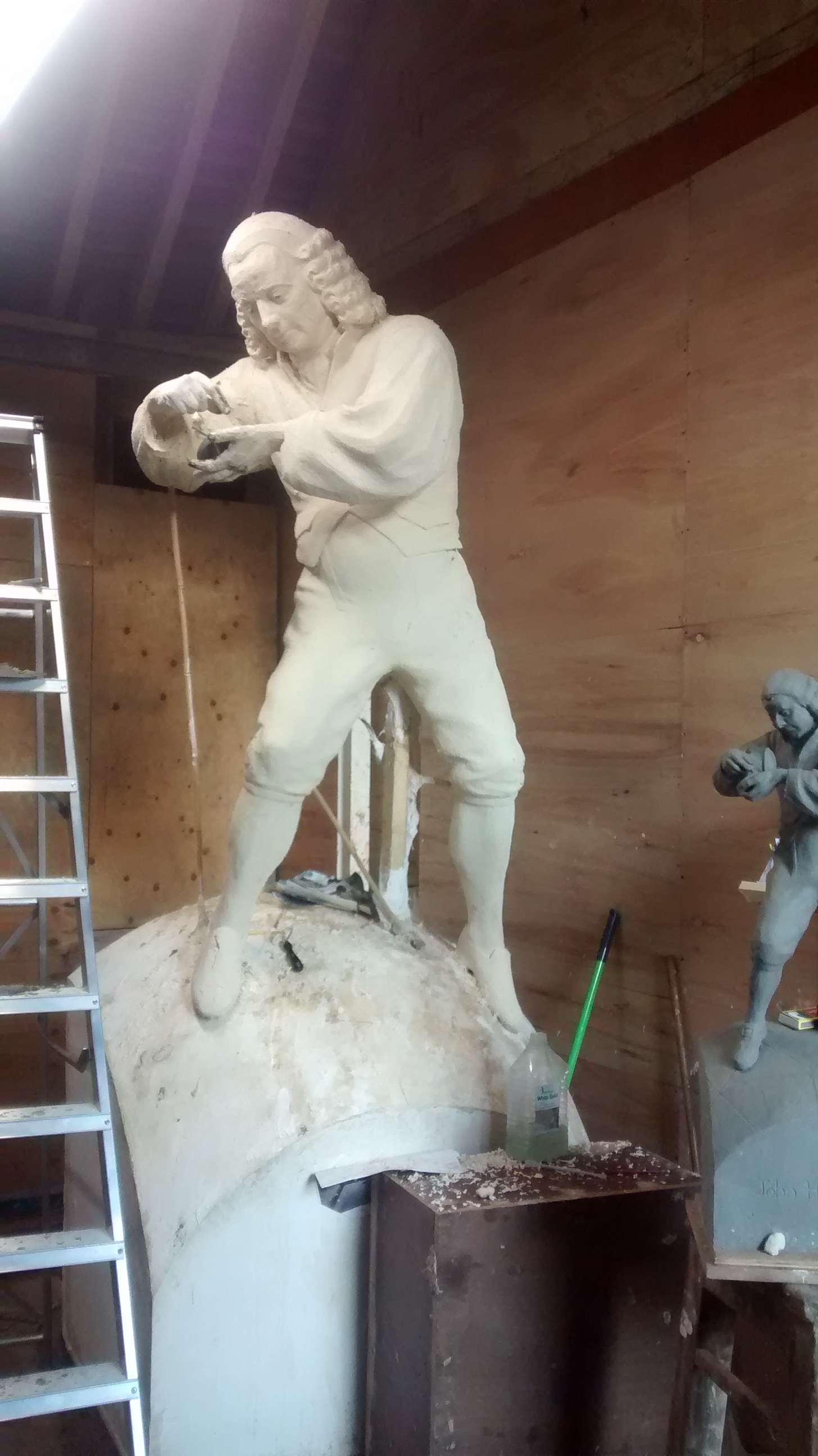 October 2018. Having received photos and reports from sculptor Marcus Cornish that work progressing well on the statue, we then had the good news that North Lincolnshire Council has granted planning permission for installation in the Market Place, the village’s chosen location.

We don’t have a completion date as yet – this will depend on the foundry where the statue will be cast as well as arranging transport for both the statue and the stone plinth, together with the groundwork preparation.  We will keep you informed as we progress. 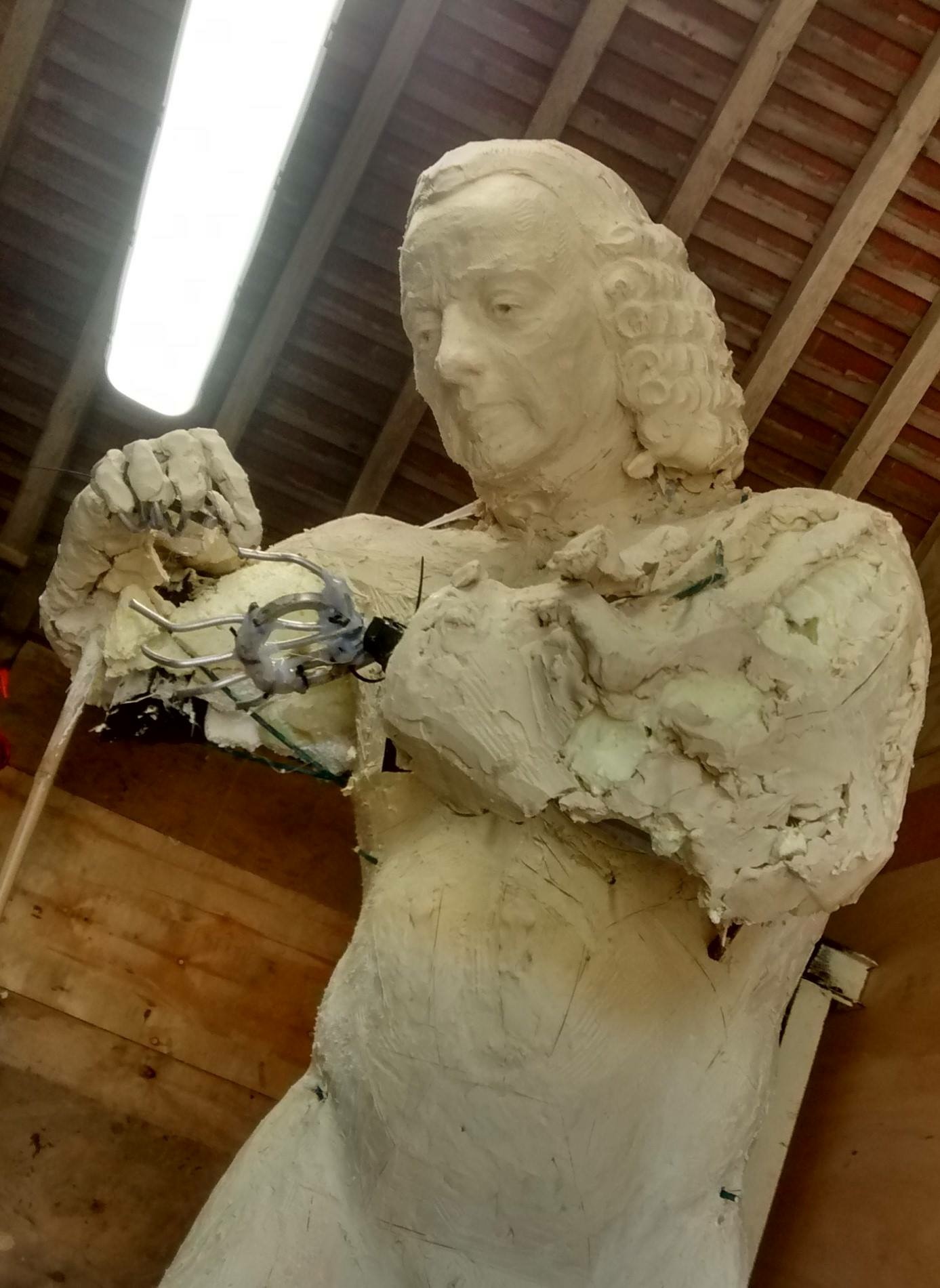 We asked the residents, via this website and our FaceBook page, to complete a survey as to where they would prefer the statue of John Harrison to be located – in the Market Place or on the Church Bank.  The survey has now been completed.  The preference of those who voted or commented on the FB page was 56% in favour of the Market Place with the remaining 44% preferring the Church Bank.

The Better Barrow statue Committee will therefore, proceed to investigate placing the statue in the Market Place with the Church Bank being the fall-back location should the Market Place be unsuitable for any reason.

It should be noted that there are many steps and considerations to be undertaken – such as the required foundations, lighting, etc. – prior to applying to planning permission, at which point the residents of Barrow will be able to make their views know to the North Lincs Planning Committee.

Over the Christmas period Better Barrow’s appeal for the funds required to commission, create and erect the statue was launched.  This was covered in the local BBC News.

Please see our Donate page if you wish to contribute to the fund.  Thank You.

Marcus Cornish, the sculptor who has been selected to create the statue of John Harrison, visited Barrow on the 31st October 2017.  The aim of the visit was two-fold:

Marcus has developed the maquette into a more finished version than was available at the selection day, incorporating a number of suggestions that the BBCP had given him.  As well as a cleaner finish, the clothing had been developed based on original garments that had been loaned to Marcus and a ship’s bollard with rope entwined around it had been added to emphasise the marine connection (this also acts as added security – making it more difficult for the statue to be stolen for scrap metal).  The images below show three views of the maquette as well as Marcus making some on-site modifications to the rope (please click on the images to see them properly). 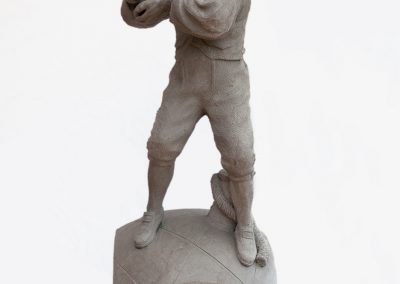 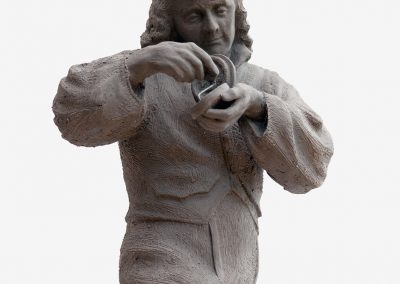 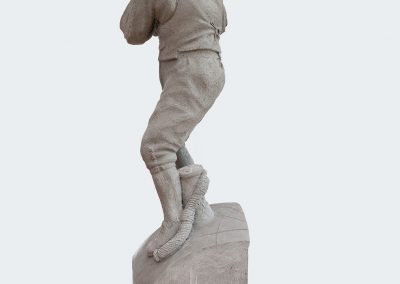 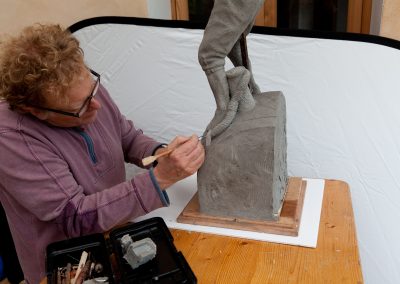 The BBCP are considering two possible locations within the village’s conservation area for the statue:

To get a better idea of how the statue would look in these two locations Marcus had brought a cardboard mock-up of the statue together with a plywood base. Below are a few pictures of the mock-up in both locations – again please click on the images to see them properly.  We hope to add some later where we photoshop the maquette into the locations 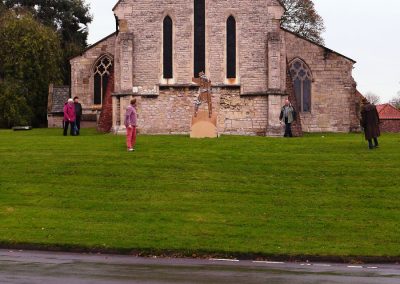 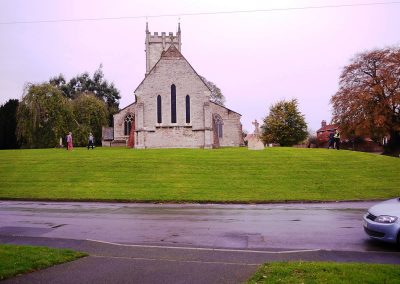 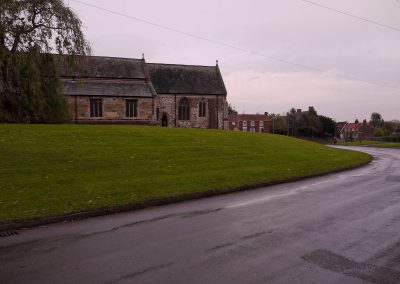 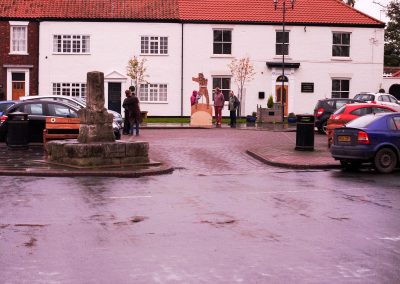 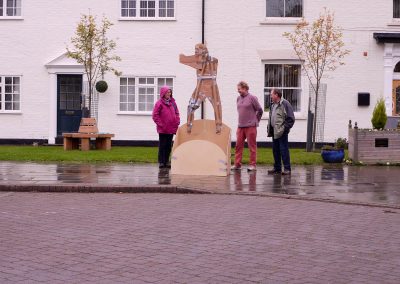 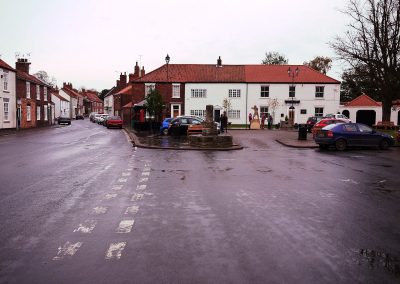 While we now have an idea of what the statue would look like in both locations there are a number of other factors to take into account before making any decision.  While the BBCP are commissioning the statue we do not own the land on either of the two locations.  The Market Place is owned by the Parish Council and the land around the Church is owned by the CofE.  We therefore need to agree with both parties on matters such as final ownership of the statue, the necessary ground work to be carried out on both locations, installation of additional lighting, etc.  In addition, since both sites are within the Conservation Area there will be various planning procedures we need to follow – as a starter we need to discuss with the North Lincs Conservation Officer what steps he thinks will be necessary to achieve permission at both locations.

Once we have a clearer understanding of the factors and procedures associated with both locations we will come back to the village with more details on the two options.

The desire for a statue of Harrison arose from the original questionnaire and consultation in the village about what people would like to see in Barrow, especially in the Market Place. A statue celebrating John Harrison was high on people’s wish lists. Having researched possible artists and consulted widely – including discussions with the Larkin Society which was responsible for the statue of Philip Larkin in Hull Station – three sculptors were short-listed.

Each submitted a maquette – a small version of the final piece – and gave a presentation to an invited panel (see below for a list) as well as being interviewed by the Better Barrow trustees. Following this, a public consultation was held and Marcus Cornish’s design was chosen.  Feedback indicated that people were impressed by the depiction of Harrison as a working man, always active and focused on finding a solution to the problem of longitude. He is portrayed in his working clothes, carefully winding H4. They also liked the representation of the globe beneath his feet, referring both to his work and to his worldwide importance.

There will now be much more detailed discussions with Marcus about his work and the siting of the statue, whether in the Market Place or near the church. In addition, of course, we will be preparing publicity and fund-raising information for the next stage of the project. 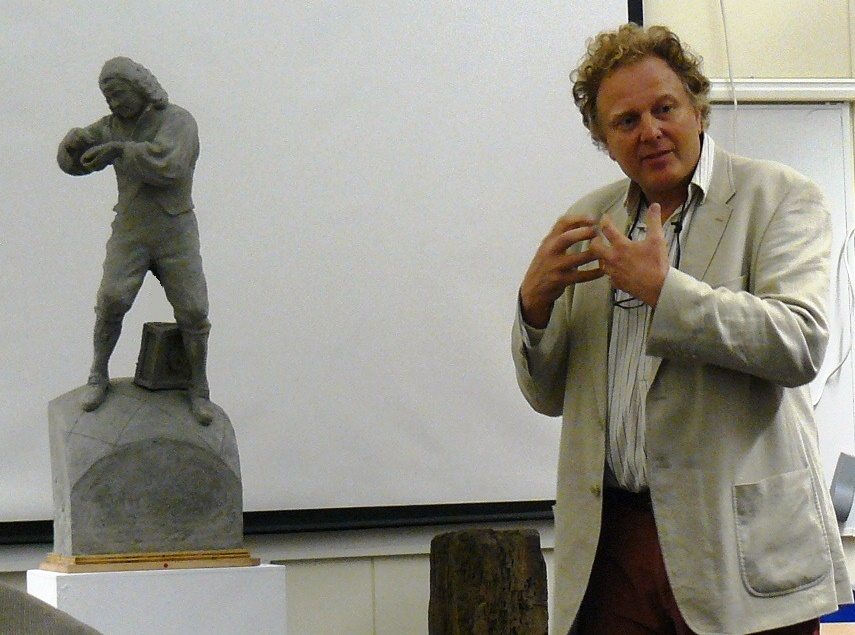